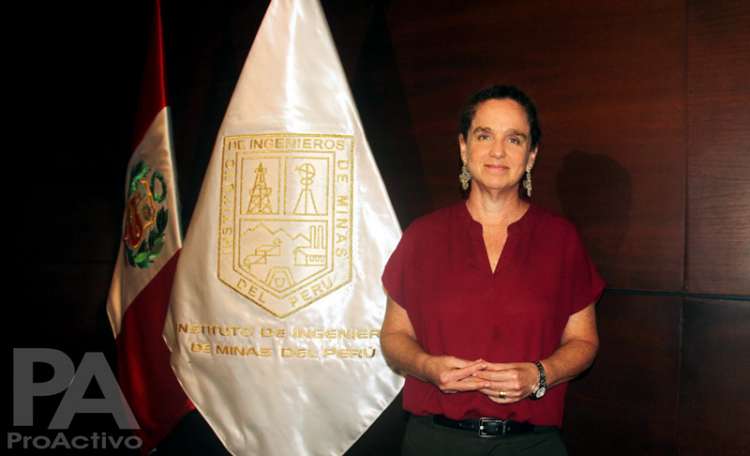 ProActivo | The mining sector in Peru is the main engine of the economy because it generates the most investments and this allows stable growth, said economist Claudia Cooper in the framework of the Thursday Mining organized by the Institute of Mining Engineers of Peru. “The mining sector is so important that it influences the Gross Domestic Product, in income, it moves almost everything. Peru’s growth depends a lot on mining because the dollar is also an important component in the financial sector”, said the former economy and finance minister exclusively for ProActive.

She added that the sector continues to advance, depending on the external factor, despite the political difficulties in Peru. “Distribution is there, what there is not is the ability for it to become prosperity. They are huge challenges because in reality we are a very dissimilar society and we need a State that manages to articulate”.
Cooper also said that it is necessary for companies to begin to perform that role because the state reform will still delay. “The challenge is that mining coexists better in the society in which it operates”.

“Peru has a very competitive situation. The current constitution allows the same treatment of foreign investment as local investment and free capital mobility. We have a very strong macroeconomics, very low interest rates, our problem is still political, we could have much more than we have today”, Cooper said, regarding mining challenges.

She detailed that the procedure in the mining sector responds to a dissatisfaction of the population so that the State generates more formalities in response to society’s claims. In this regard, he commented that when there is a better situation, it is likely that fewer procedures will be used. “Tramitology for me is endogenous to what happens in (national) politics. That is to say, if the people are dissatisfied, the State puts more formalities to try to satisfy that demand of the population, that is a bit of a problem”, she said.

Claudia Cooper recalled that GDP growth per capita between 1922 to 1972 was 2.4% per year, on average. Also, that in the 70s and 80s, it fell to -1.4%, and then came the well-known debacle of the 80s; and that subsequently changed the national economic scenario, to what we know today.

In this regard, the economist said that these changes were a consequence of the political and economic reforms that allowed us to “open up (as a country) to the world, and decide to grow in private investment. The Constitution led us in that direction”.

“We decided that we had to generate competitiveness, investment and openness to achieve that pace of sustainable growth”, she said.

She also said that with the reforms we have reached Colombia today, we surpass Bolivia, Ecuador, Paraguay and Venezuela, but we are not yet at the level of Chile. “If we see Peru between 80 and 93, in terms of GDP per capita, we were ranked 126th in some 160 economies”.

She explained that after the entry into force of the 1993 Constitution, Peru rose to 25th place, and then went down to the 50th place in the late 90s due to a crisis in Russia.

However, in the years of the metal boom (2003-2013), Peru traced to the 11th position worldwide, which caused admiration in the world, for being the fastest growing country in the region.

“That is, we improve. What we did was position ourselves very well to run a good wave. We were in a very expectant position to run the wave quite well, ”said the former Minister of Economy and Finance.

Contribution of mining in Peru

Cooper explained that the Peruvian economy is sustainable internally and externally and one of those primary factors is mining, which marks two-thirds of all traditional Peruvian exports.

She explained that the other important sectors are: the services sector (tourism) and non-traditional exports (agribusiness), which grow very strongly.

“We see that in Peru the other two most positioned sectors for our export basket are agribusiness and tourism. Those are the ones that have to live with the mining sector to say that we don’t live in a single sector”, she said.

Also highlighted the important role of mining because it generates resources in the regions to build the infrastructure that tourism needs. “We have to bet on these sectors for real productive diversification and that doesn’t take too long. Peru has already shown that it is competitive”.

The economist mentioned that the most important miners are in the poorest regions of Peru, and that it is necessary to keep the money coming so that these areas can develop. “There is a delay of about two years between the entrance to the public treasury and the execution of the expenditure, which causes mismatches with the political times of the authorities and discomforts of the population. There are resources, but they do not generate prosperity”.